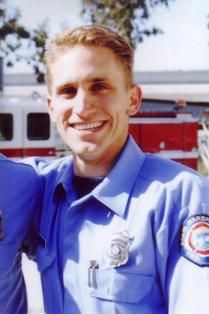 Last Call: August 27, 1999
On August 27, 1999 the Santa Barbara City Firefighters suffered their greatest loss. Stephen Joseph Masto died while fighting the Camuesa fire in the Los Padres National Forest. The fire that burned 180 acres was brought under control the next day. Not a particularly exciting fire. Not at all worth a life.

Steve was assigned as a line medical provider and died of apparent heat stroke while scaling a deep ravine. It was his first wildland fire with Santa Barbara City Fire.

Steve had joined the fire department earlier that year and had quickly won over the hearts of even the most stoic firefighters. His infectious smile, great attitude, general love of the job and life were evident each day. His road to the City had been long and he had brought a great deal of experience to us.

I took an immediate liking to Steve. We had worked together a lot at station 2. He had quickly learned the job and was well on his way to a successful career. Unfortunately things went dreadfully wrong that day and his career was cut short. I just wish we could have changed things.

It was a series of mistakes, one cannot be singled out. But, the mistakes compounded and he paid the ultimate price. We had sent him to the fire and he did not return. Many of us still have guilt about the way it occurred. Many of us still feel responsible. I guess that is human nature. All of us wish we could go back to that day to just change one thing. But we cannot and we live with that each day.


His picture hangs above the door to the apparatus bay at station 5, a gentle reminder for all of us to be careful. His badge number is affixed to helmets, uniforms, turnouts, gear lockers and badges. People have pictures, his business card and other reminders in their clothes lockers. He is still here at SBFD. We are doing our best to keep him alive in our hearts.

We miss Steve. We miss Lisa. We miss the Masto Family. We hope they are doing well. 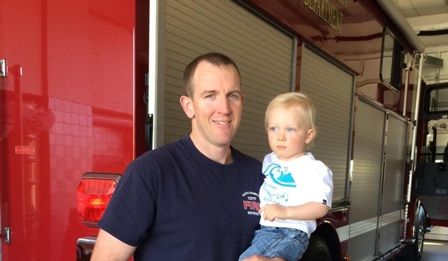 Firefighter Corrigan had come to the station to conduct some business when he was apparently stricken with an unknown medical emergency. Fellow on-duty firefighters found Firefighter Corrigan and immediately summoned assistance. It was soon evident that Daniel was deceased and Santa Barbara City Police and County Sheriffs were called to the scene. There was no evidence of foul play. Autopsy results are pending.

Firefighter Corrigan’s accomplishments and expertise in his field are too vast to list here. Daniel had a bright future ahead of him in a profession he loved.

Daniel Corrigan was 35 years old. He and his fiancée, Sarah Starr, were the parents of a 1 ½ year old son, Jack. A second child is expected later this spring. Daniel is survived by his parents, Anne and John Corrigan, and two sisters, Rosanne Benning and Debora Carlson. His father John is retired from the Alameda County Fire Department.

Daniel was extremely devoted to Sarah, and a dedicated father, friend, and colleague. He was talented, intelligent, kind and possessed a tremendous sense of humor. His passing will be felt deeply by all who knew him.

Support the families of our Fallen